The architect of particles (and of the future)

In a beautiful setting doubly lit by daylight and the Italian lamps of the Cercle d’HEC Montréal, we welcomed a star architect on May 9:  Enric Ruiz-Geli, renowned for his work with Jeremy Rifkin and Ferran Adrià, among many other achievements.

This extraordinary man, whose passions range from architecture and gastronomy to the environment and particles, insists that the change we want to see in the world must begin with that which drives us. His buildings embody his philosophy: each structure is an innovative pilot project that integrates new knowledge to favour a symbiotic interaction between the spaces created and their environment. 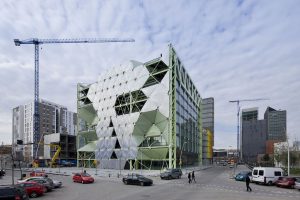 For the top industry worldwide, construction (which garners the most economic wealth along with the most energy, in which each plan traces the next 40 to 100 years of a given space), innovation should be the rule rather than the exception, he argues.

The architect then acts as a designer of these changes, an activist of innovation and a developer who envisions the future needs and constraints of the next generation well in advance.

To succeed, we must begin by reviewing the way we conceive and build our buildings, invest in knowledge rather than in steel, and constantly rethink our acquisitions to save energy and to reduce the carbon footprint of what we produce. Investing more money in knowledge than in resources fosters enhanced efficiency, a better understanding of how objects interact with their environment, and the power to draw inspiration from nature to create a more balanced world that evolves and adapts more easily. Architecture must therefore aim to integrate new trades and new competencies, and must consider hybridizations and common reflections, to integrate diverse knowledge.

The questions asked by the director of the Cloud 9 Studio, which address the properties acquired from design and architecture, where strikingly relevant:

Why are building façades the same when each structure has different openings towards its environment, with variance in energy received of up to 300%?

Why not also design darkness in our spaces rather than pay to light up our cars sometime even when it’s still light out?

How can we improve education for the coming generations if we do not set an example and perform the reality they perceive and that they often take for granted?

Enric Ruiz-Geli points out that: “If knowledge goes in books and not in reality, then it stays in books and not in reality.” It is therefore by being a maker that we educate and transform the future. A maker that works on more distributed structures (to reduce energy and the resources used tenfold), a maker that creates a fog using nitrogen to reduce the impact of the sun in Spain, a country whose winters last as long as spring in Montréal. A maker that integrates technology to design intelligent façades, walls that light up by imitating the fluorescent properties of jellyfish, lights that turn on and off by adapting to people’s positions and to ambient light. A maker that strives to combine new materials and methods, democratize his or her knowledge and monitor buildings for up to two years after construction to continue to improve them and take advantage of experience and feedback.

One could continue to list Ruiz-Geli’s achievements for hours, as Patrick Cohendet explains. In the presence of a man of this calibre, you yearn to learn more about his philosophy and experiences to the point that you may even forget to eat supper!

To conclude, as we must, here are some of the profound lessons that we retained from this fine conference:

To valorize knowledge and ideas, invest in them rather than in resources

Do and perform the change you want to drive, there is no better activist than you to initiate a community that will follow you.

Draw inspiration from equilibria and ecosystems created by nature to imagine the future and grasp complexity.

Educate, transmit and share your knowledge so that the reality you hope for comes to fruition sooner. 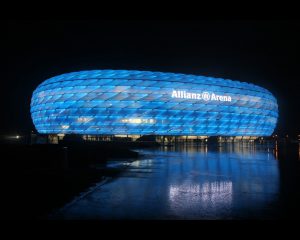 Enric Ruiz-Geli is the founder, senior architect and director of Cloud 9 studio. Cloud 9’s green agenda is to look at architecture pilot projects in global warming scenarios. Enric Ruiz-Geli is the architect behind the Villa Nurbs in Empuriabrava, an organically formed, ecological and futuristic house; the Millennium Project in Valladolid, an urban retrofitting; lBulliFoundation for the chief Ferran Adrià, a living laboratory in Cap de Creus; and the Media-ICT building in district 22 @ in Barcelona, a Net Zero Building with a very competitive cost of construction, named Best Building of the World by the World Architecture Festival (WAF 2011). Enric Ruiz-Geli also carried out the H108 project in Taipei, which obtained Leadership in Energy and Environmental Design (LEED) certification for a new construction in 2014.

Enric Ruiz-Geli has given conferences and collaborated with several laboratories including Angewandte, AA, UCLA, ArtCenter in Pasadena, CITA, RMIT, MIT, Bartlett School of Architecture, in London, ETHZ, and the IE School of Architecture. Mr. Ruiz-Geli is also Co-Chairman of the 3rd Industrial Revolution Architects Roundtable committee with Jeremy Rifkin, which seeks to develop the TIR in cities.

Enric Ruiz-Geli has been frequently invited to speak during the weeklong Summer school on management of creativity and innovation in Barcelona.

Great news!  The Summer School is back in person! Over 15 intensive days, from June 23 to July 8, and in 2 creative cities, join us to co-create an enriching, human, inspiring and collaborative experience.

Innovation schools around the world